I’ve seen this floating around on Facebook, so I had to point this out to those who are so easily taken in…

Shake up, weeple! Don’t be fooled. Clearly this image was taken with a cateye lens!

I’ve shared this especially because of that guy who took offense when I (quite rightly) called flat earthers “morons”. By his logic, this conclusion makes perfect sense… Remember fuckaroos, reality is perceptually subjective; therefore dogs are flat! (Non sequitur borrowed and conclusion changed without permission, but the logic is identical.)

Edit: I refer above to the logic of this comment.

Just a random thought in a quick post today…

Earlier, while browsing one of the Facebook groups I belong to, I read a post directed at newcomers. The original poster saw the need to condescend to them and explain how sarcasm works, via a linked article, which of course I did not read. But I did read the title, which explained that sarcasm is all about saying the opposite of what you mean.

I did a double-take. What, sarcasm is always ironic? So I’ve been wrong all these years? Thus I spent a few minutes searching for varying definitions of sarcasm in online dictionaries. At first I was taken aback, thinking that I had indeed been wrong, until I found this one.

OK, I’m off the hook. The definition in my head is that sarcasm can be any witty retort used to mock, ridicule or deride – a statement that may be ironic, but doesn’t have to be. I’m disappointed that many dictionaries seem to get it wrong, in that they state that sarcasm is always ironic. It seems that many people also get it wrong, which helps explain why people often don’t get sarcasm… To be fair though, written sarcasm can be difficult to get, especially when the statement is ironic. Spoken words convey the sarcasm more easily because the tone of voice often gives them away, and it’s more difficult to convey tone in written words.

Since I love writing anecdotes, I’ll illustrate this with an example: I happen to remember the first time I was ever sarcastic, which stands out for me because it was the day that my father taught me the word “sarcasm” itself. I was twelve years old. (Josh has me beat here… He’s only eight but already uses sarcasm naturally, and recognizes it. He punches me when I’m sarcastic to him.)

Anyway, I don’t remember the whole context, but do remember the gist of the conversation… It was a picture on television, or a newspaper or something, that conveyed an emotional attachment between people, and my father had given a similar example of a husband and wife. (I’m totally making this part up. I really don’t remember.) I retorted, “One man and his dog”, with emphasis on the word “dog”. And everybody laughed, because my sarcastic comment ridiculed the subject at hand.

In my example, I didn’t say the opposite of what I meant. I said exactly what I meant, and it was still sarcasm.

Just thought I’d share that random thought… Use it / don’t use it.

My son has been back in my care for nearly five months now, and all is well. It’s not perfect, but it’s good. I’m happy. He’s happy, and we are closer than ever. Our relationship is the best it’s been yet, and it’s just going to get better from here on. His grades on his school tests could be better though, and I have been trying to get him to work harder without having to do the OT that has been recommended by his teacher. (“He doesn’t need to have OT and I am happy with his performance, but he could benefit from it.” Whatever that means.) My view is, he simply doesn’t try hard enough… He’s a bright boy, but he rushes through his homework without focusing enough on it because he wants to play games, and I want to try to get him to concentrate without any occupational therapy. (In other words, he is a perfectly normal eight year old boy. Games are more important than homework, and so they should be.) I’m a strong believer in not going overboard with too many extra lessons or therapy. He is doing well enough at school. He’s only in grade two, and maybe he is under-achieving a little, but he is doing fine.

But that’s not what I want to write about today… Instead I need to focus on my sarcasm. I need to make an effort to cut it down a little in front of him. I didn’t understand sarcasm until I was about twelve years old, but Josh is getting it already, and he’s only eight. It’s not just me – he has a Star Wars Lego movie that he watches quite often, and in it, Sidious is often sarcastic to one of his minions (General Grievous). The minion then makes an embarrassing comment, acknowledging praise that was not sincere since it was said sarcastically, to which Sidious replies, “Sarcasm!” and then they all laugh at the minion’s expense. It’s quite silly, but it does convey the meaning of sarcasm effectively enough for a child to be able to understand, probably by accident because I doubt that it was done on purpose. That and my sarcasm seems to have brought Josh to an understanding of sarcasm that I didn’t have at his age. (Actually, unless it is my imagination, children these days are far more sophisticated than my generation was.) And as a result, he has started experimenting with sarcasm himself – quite successfully – generally with his grandmother as the designated victim. When he isn’t experimenting with his own snark, he asks me, after I say something sarcastic, if I was being sarcastic. (I’d be impressed if I thought that it was wise for an eight year old to understand sarcasm, which I do not.)

So here’s what happened this last weekend – it was just one of many examples where I relished the opportunity to mock somebody and have a laugh at someone else’s expense, but one that I could have avoided had I been thinking of the example I set for my son…

So we were at Nando’s, waiting for our order of a full chicken, fries, salad and drinks. Outside, I’d been approached by a woman who was struggling with her lot in life. She was poor, and was selling some kitchen cloths. Since she wasn’t begging but was trying to make an honest living, and was clearly hungry, I felt empathy for her, and had bought some of her microfiber cleaning cloths. The cloths were much like those in the image below, except they were packed such that they were all attached together, so what I had in my hand was a tightly packed rectangle of rainbow-coloured cloths. 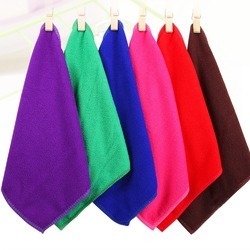 We sat there for a couple of minutes, when an elderly white woman came in and also ordered some food. Then she sat down on the bench waiting as we were. But after a few minutes, the woman became visibly upset. She went to the counter and started complaining, at first to the cashier, and then to the manager. She was shouting and screaming and carrying on about waiting more than half an hour for her food, and making quite a scene. The cashier, who had done nothing wrong, looked embarrassed, and I always feel bad for service staff who get treated unfairly. Ever since I worked as a bank teller twenty years ago, I have felt this way. Eventually she sat down again, after the manager assured her that he would take care of the (non-existent) problem personally.

That’s about when I should have known better, but I couldn’t stop myself. So I did my thing…

I walked up to the counter, and proceeded to complain about their poor service. But I didn’t complain in my normal voice…. Nooooo. Instead I made a voice like Terry Jones from Monty Python, in those skits where he pretended to be a woman… [Squeaky voice] “Where’s my fucking chicken? I’ve been waiting for over half an hour! This is unacceptable! Where’s my chicken?” That (silly voice) got enough laughs already, but I was on a roll and that rectangular pack of super-colourful cleaning cloths became a weapon in my hands. I started waving it around, then waggling it at the cashier in front of me, before resorting to banging it against the counter… Whup! Whup! Whup! Where’s my fucking chicken? Where!?! Where’s [whup!] my [whup] chicken [whup]?

It was funny. I had three cashiers, the two people doing the cooking, as well as the manager, in stitches, not to mention Josh. The rude old woman didn’t say another word, but I wasn’t really thinking about her. I never do. (The victim I mean. The target of the sarcasm. The one everybody else laughs at.) Nor was I thinking about the example I was setting for Josh. And that brings me back to my reason for writing this post… I can’t help being a sarcastic asshole. It’s the culmination of years of practice. But I can make an effort to be less of an asshole in front of Josh.

My brother made an excellent point to me last week… when I mentioned in a Facebook status that I really need to work on my choice of words (when asking people questions out of genuine curiosity, and accidentally then instigating them to be defensive). I tend to be sarcastic, often even in my writing here. (Although I wasn’t being sarcastic in the comments I had in mind. It doesn’t matter, because sarcasm often is relevant.) And tone doesn’t always come across well in written work, so sometimes when I’m being sarcastic (or maybe facetious when I aim for sarcasm and miss completely), it comes across aggressive or arrogant. Maybe this is especially the case with people who don’t know me, and think that my conclusions to argumentative posts are aggressive or arrogant, when they’re really meant to include a little bit of humour… So my sarcasm is just supposed to be funny! I thought it was obvious… Maybe not?

But even verbal sarcasm doesn’t always go as intended. Why is it, I wonder, that people so often don’t get sarcasm? It’s fucking annoying you know, when I say something really devastating, and at the very fucking least, I expect someone to burst into tears. At least! But instead, they stare back at me blankly.

So this is my new policy: Although I still refuse to use sarcasm tags (Urgh! Like… some statement </sarcasm>), I’ll apologise for the sarcasm right afterwards. It’s totally insincere of course, but at least the apology is like a label: What he just said was sarcastic. You should feel stupid now. Have a nice day, fucker.

I got home from watching the new Star Wars movie, only to be greeted by an asinine share on social media.

This was shared on one of those “atheists versus believers” debate groups. The question in my mind is: Why? Why make completely pointless statements on groups meant for debate? Maybe this chap is mentally ill. 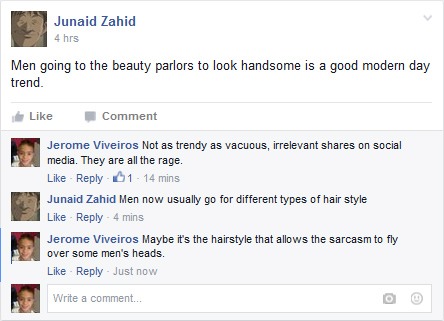 Sigh. I rest my case.