Edit: I’ve shared the firmware on my Google drive in case Kogan stop sharing it at some point. That might happen since this TV is a few years old now. It’s at the bottom of this post but I’m including it here too. If you know how to flash the TV, that saves you having to read on. Get it here.

A while back I wrote about the issues I had with my TV, a JVC 55 inch TV (which is really a rebranded Kogan TV because JVC do not manufacture these devices). I still have those issues occasionally, and still have to update the firmware periodically. In fact, I have twice now had a new problem, where rather than the TV going into an endless booting and rebooting loop, or displaying multiple cascaded Android errors, I’ve seen the Facebook window overlaid on top of movies and Xbox games after changing the input to use one of the HDMI inputs for either my Blu-Ray player or Xbox. In any case, a firmware update always fixes the issue for me.

However, I needed to download the firmware again on a different computer, and I see they have moved the content on the Kogan site. It’s not difficult to find, because my original link, which is now broken, includes the model of TV in a string “kaled553dsmtza”. A product search on their site leads to this page, and you can find the firmware there.

That page contains the instructions on how to update the firmware, but briefly, it is this:

If you look around on their site, they also explain how to do a reset, and how to initiate the firmware update from the UI (It’s here as of this writing), assuming you aren’t stuck in a infinite rebooting loop, of course. I find that it’s best to flash the firmware every now and then before it goes that far. So as soon as I see one or two errors, or the screen displays messed up overlays on top when using HDMI inputs, I flash it right away.

I keep a USB stick that I bought especially for flashing the TV. I literally use it for nothing else and keep it near the TV. In fact it’s still plugged in because I flashed the TV yesterday and forgot to remove it. Actually mine didn’t want to read the USB from the normal boot process, but I followed the instructions I found on their site to initiate the update from the user interface, and that worked.

Just so you don’t have to go there… to flash the TV from the UI was as simple as:

Use the remote to select More Apps… 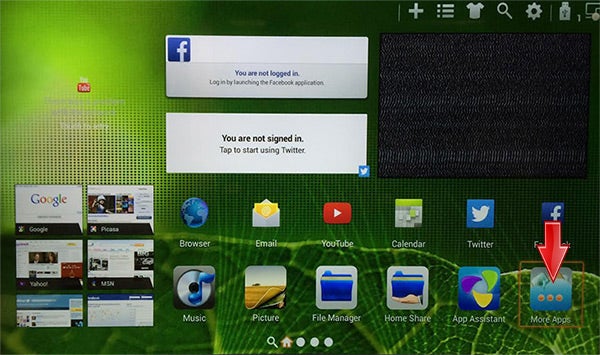 Unlike this image, select Soft Upgrade…

I took those from the instructions for the factory reset page from their site, except that instead of following the last step, I selected to do the software update, which then rebooted the set and updated it from the USB. Note that the home screen, with Facebook and Twitter windows, which I never use, is what was being overlaid on top of my movies and Xbox games. Flashing the TV fixed it.

Since Kogan might one day remove that firmware, I’ve shared my one on my Google drive just in case. Get it here.
Note that the TV start-up logo changes to Kogan, not JVC, after you flash it. It doesn’t matter; everything else is identical and there is no noticeable difference between this and the software that was installed when I bought my JVC TV. I have never found the JVC firmware anyway, and I don’t really care what the start-up text is, as long as the thing actually works.

Don’t ask me any questions about this, please. What I’ve written is all I know.