Once again… this is one of those posts where I respond to a search string that brought a reader here. This one is short. I’m only bothering with one of these… 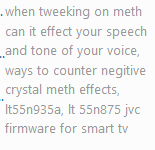 There. That was simple enough. Seriously, if you’re wondering “How to counter negative side-effects of shooting myself in the foot?”, you need to consider maybe not shooting yourself in the foot.

While I don’t have much time to write, I figured it’s a good time to share some of my snark. (Sarcasm – it doesn’t have to be ironic.)

I don’t think the person asking the question really thought it through. I think my comment really makes the point, so I won’t add anything here. 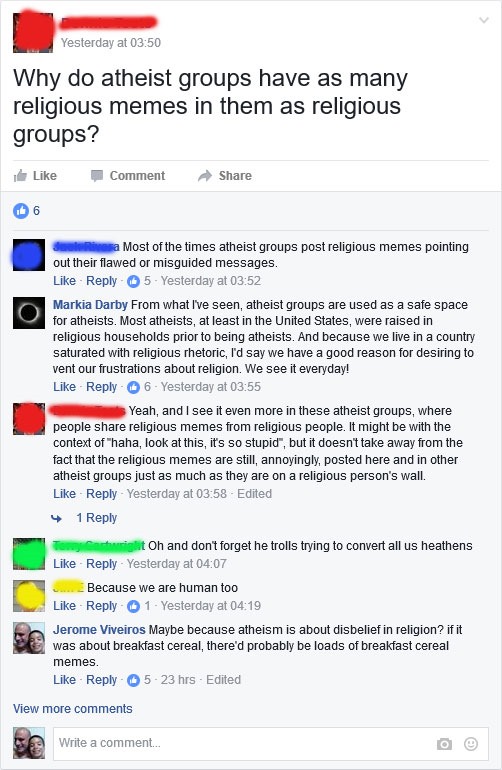 An extra short one today. Somebody got here after searching for this.

How to counteract methamphetamine’s negative side effects?

Seriously, it’s an intelligently phrased question (for a change), so I guess the searcher is not an idiot. But you can’t counteract the effects while you continue to use, which I assume is what you want. You have to accept the fact that you can’t use meth any longer, and then the effects won’t need to be counteracted because you won’t have them anymore.

I’ve written about those effects before, so you can search this blog if you want to read about them. But the effects aren’t permanent. The point of exposing how many and how severe they are is to bring them to your attention so that you can wake up and realize what you are doing to yourself, not to try to find a way of living with them. Unless of course you’re happy to be a meth zombie for the rest of your life.

The most popular search string getting here the last two days was this:

Would crystal meth cause a man to fall asleep during a blow job or sex?

I had an anecdote about a time I zoned out and started dreaming during sex, and wrote it on my old blog, but won’t be repeating that here today… Think of it this way: Meth is a stimulant. It stimulates the release of dopamine in your brain, where dopamine is the fuel that keeps you going. That fuel is produced by a gland in your brain, and while you continue using, you flood your brain with more of that fuel, which results in your feeling good and staying awake. (Incidentally, if you’re already high, using more won’t make you any higher, but it will cause more dopamine to be released.)

But as long as you continue to use, you deplete that dopamine. (Think of it as a limited resource.) When there is no more, no amount of the drug will keep you going, and you will fall asleep no matter what you are doing and no matter how much more meth you use. When you reach that point, you need to sleep, during which time more dopamine will be produced, before the drug can continue to work for you.

How long it takes varies. Everybody’s metabolism is faster than normal on meth, so the rate at which you deplete your dopamine and then crash depends on how much and how often you use. The greater the quantity and the frequency of usage (which tends to go up when you become more tolerant of the drug), the sooner you crash. I used to stay awake for six to seven days at a time, but only because, most of the time, I used only at night. (On weekdays, I used at night and worked during the day but did not use during the day… except for a bad patch around 2011 when I used at work as well. And wrote some crazy shit on my old blog. Fortunately for me, you can’t read that anymore.) If you use both during the night and the day, you’ll end up depleting all your limited dopamine in about half the time, and crash sooner.

But as usual, the person using meth was asking the wrong question. (When you’re high on meth, take it for granted that your priorities are all wrong.) The search string was submitted around December 25th; Christmas day. Is this really the day that you should be spending your time indoors with your significant other and trying to have extended sex marathons? Don’t you have anything better to do? (Ignoring the fact that sex on meth is all about you and your personal pleasure anyway. Sex on meth is like mutual masturbation. Your partner becomes a sex toy and nothing more.)

The real issue here is that when you are in that state, you lose all track of time… All the days are the same and you probably don’t even know what day it is. You tweak and act like a zombie, so you remain awake for days at a time, but don’t make good use of that time. You waste time all the time.

I’m not saying that everybody should celebrate Christmas. But many should… I’m an atheist and I do. You don’t have to be Christian or religious to celebrate Christmas. In fact most of the things we associate with Christmas – the tree, Santa and giving presents – have nothing whatsoever to do with Christianity. You should be spending time with family, giving and receiving gifts, eating until you burst and maybe drinking too much champagne… not drugging yourself stupid/horny and then wondering why you can’t stay awake long enough to carry out your stupid fucking fantasies.

I wrote this yesterday. I am loath to post it because it will likely lead to more of these weird search results getting here, but think it’s kind of funny, so here goes…

(Spelled “befour”. I corrected it before writing the heading above.)

How the fuck should I know? Really, your guess should be as good as mine. But because I’m mocking the searcher, I’ll answer anyway:

Maybe, men would go to brothels, and pay a little something to have a gander behind a curtain. I think that’s almost certainly the answer.

But the obvious answer to the idiotic question does lead to two interesting points:

Really, what have we gained knowing this factoid? Nothing! In fact, you and I together (and anyone else reading this – Sorry!) have wasted some brain cells on this pointless information. Thanks for that, wanker.

Edit: A random grammar tidbit: I was unsure whether the correct word to use in the first paragraph was “loathe” or “loath”. In fact, I used the wrong word until I looked it up here.

(The next post is relevant to addiction. It will be live 6PM South African time. It also deals with a search string, but one where the person claims to have only positive spiritual effects from using meth.)