Someone made a strange claim the other day, a claim that implied I might be using meth. So on the day I heard, I popped into a rehab on the way home from work and got them to give me a drug test. The place used to be called Sharp Addiction Clinic but the name has changed since I was last there.

Last time I shared a drug test from a different place, some arsehole downloaded it and changed the name. So I asked these people if it would be OK to share my test online, and they looked at me as if I’m mad. Whatever, I assume that implies consent.

It’s a huge insult to be accused of using. I’m six years and over four months clean, but when such accusations are made, there will always be people who take them seriously. There will always be that element of doubt to some people, and that is unnecessary and hurtful. 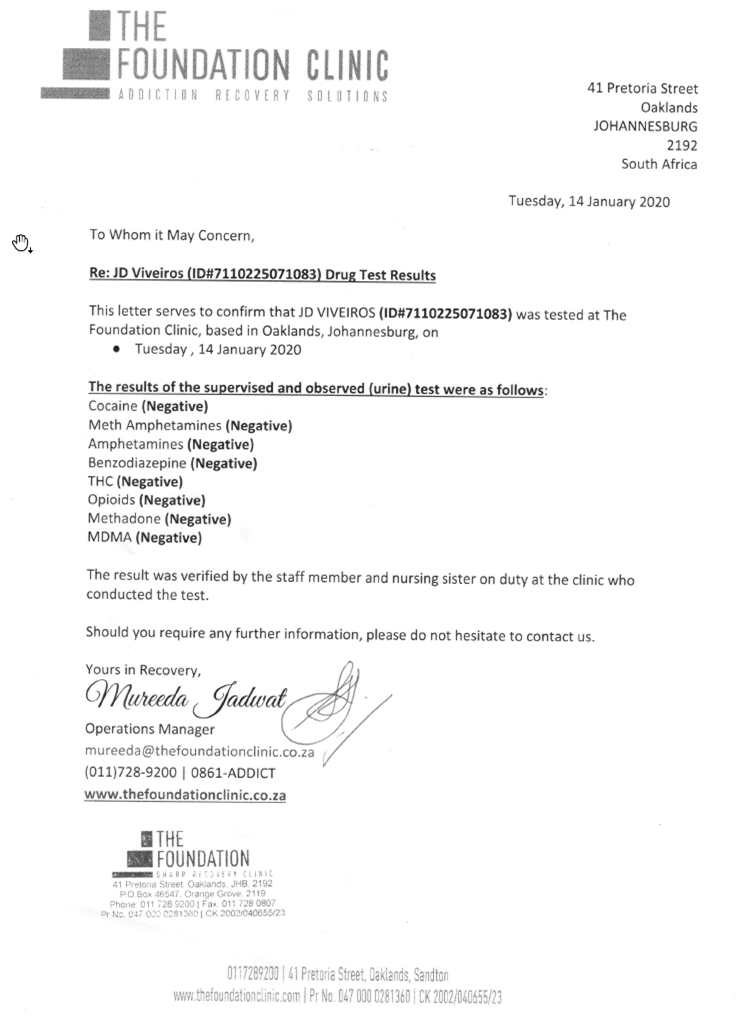 Where to start? I’m miserable, absolutely lost and depressed lately, as I have mentioned (after my ex went on a “holiday” to Cape Town that wasn’t really a holiday. She had no intention coming back, and so I am without her two year old daughter, around whom much of my life had come to revolve for the 19 months that she was here.)

But that’s not all. On this coming Monday is the family court case involving our son, who should be back with us but instead the foster care will be renewed for a further two years. I’m not 100% sure I understand why that is, since we did everything that was required for reunification to proceed. At least we did, until my ex left. (I’m not complaining – I will get him back, just not as soon as I thought.)

But it isn’t the first time she’s done something like this. Originally at the end of 2010, when we were still in a normal relationship and our son’s foster care was not formalised, she ran away to Cape Town just two days before he was going to be reunited with us. At the time I did not handle it at all well. Not knowing where she was, I filed a missing person’s report and my brother and I went to every nearby hospital looking for her.

I became almost suicidal and could not handle life on my own. I didn’t relapse immediately but it was just a matter of time. Then I found out that she was in Cape Town and had used, and talked her into stopping and remaining drug-free for a week so that when she returned (with a ticket that I purchased for her), she would be “clean”. That idea didn’t work out so well. We both relapsed together and I could not stop completely until many other things had happened and it was September 2013.

This time I am again not handling the situation very well but in a completely different way. I haven’t used, and will not use, but all this is getting to me and I am struggling to focus at work, struggling to motivate myself to do anything at all. This weekend she plans to visit so that we can go out together with both children, but someone has questioned her sobriety. (Rightly so, I suppose; but I believe that she is clean.) I suggested to her that she does a test, but I do think it is unfair that she is expected to do one but nobody has asked me. Yes, everybody knows I am clean and I am grateful to have regained some trust, but I still feel bad for her. It feels like a double standard, so I decided to do a test this week. I was going to do one on Friday morning, but would’ve had to take time off work. Being off anyway for today gave me a chance to do it without having to rush back to work afterwards.

But in the meantime, I have been struggling at work. I have a ridiculous deadline: Four projects in two weeks. Realistically that may be out of reach even under normal circumstances, but as I am right now, being unable to concentrate and focus due to all of the stress (and since I want to keep this brief I haven’t written about all of it), meeting my deadlines is quite impossible. My boss was overseas for two weeks so I couldn’t tell him about this drama happening in the meantime, but I did tell him yesterday. I told him how I am struggling, how I got very little work done yesterday – almost nothing. And he suggested that I take a day off. It’s only one day, but here I am.

I wonder how other people deal with such stress? I don’t seem to be handling it at all well. I’m still clean, but that seems insignificant if I am unable to detach from my personal issues at work. Every time I try to focus, my mind wonders off to never-never land and when it returns, hours have passed. Yesterday I only got into some sort of a zone where I made some progress at work around 4PM, but it was progress I should’ve made at around 9AM. And of course, I felt mentally knackered and didn’t want to be there.

Anyway, here’s a test I did this morning. At least the court accepts SANCA tests, but as I say, my sobriety is not an issue. There is no chance that I will ever use meth again. None! It does piss me off that this time is passing so slowly. I’ll be two years clean on September 4th. That’s only three months away, but a long and annoying wait for the next milestone.

Edit 2016-02-16: Someone from SANCA Phoenix House caled me because two addicts used my negative test to forge test results for themselves. I am thus removing all tests uploaded to this blog.