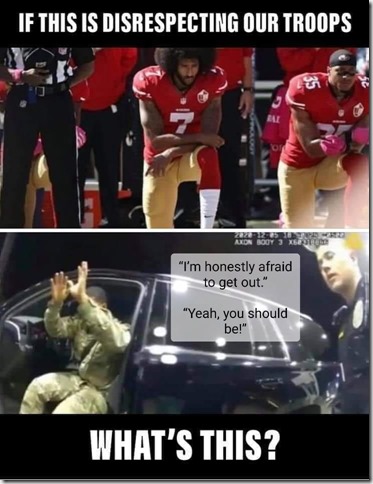 In case you’ve been living under a rock, the guy on top is Colin Kaepernick, a US football player who got blacklisted and ‘cancelled’ (but they don’t call it that apparently when initiated by the right wing) for kneeling before matches during the US national anthem to protest police brutality.

In the picture below, we have a recent incident where a US cop racially profiled, assaulted, and pepper-sprayed a driver simply because the man was black, and that man happened to be a US army officer.

So it was never about the troops. US Nationalism is about white people, power dynamics, and Colin Kaepernick was punished because he’s a black man who didn’t know his place. Also those same nationalists don’t really care about the troops anyway.

Lastly, that’s what nationalism looks like. Always. In every country. Nationalism is evil.