In my last post, I mentioned that theists often ask us atheists to prove there is no god. I also mentioned I wasn’t interested in writing about that. But I do think it adds value to consider that now.

In my research for this post, I found this article which asserts that sometimes theists have the burden of proof, and sometimes atheists do. The gist of it seems to be that whoever makes the claim has the burden, so when atheists claim there is no god, the burden lies with us. Except that isn’t what atheism is about, so the article is wrong because atheists don’t make such a claim. Theists will say that we do, but the thing is, that opens up a can of worms that they certainly don’t really want opened… but since most don’t even seem to know what atheism is, they don’t realize this either. So let’s open up that can of worms, shall we?

First I’ll jot down a couple of notes that demonstrate why shifting the burden of proof onto atheists also introduces some worms into your clever little plan.

I have dealt with many Christians who think it clever to shift the burden of proof with, “Prove god doesn’t exist”. And I always answer the same: Which god? (Crickets…) Seriously folks, Jesus/Yahweh/Allah is no more notable a claim than Odin/Zeus, or some older god you never even heard of.

Of course there’s a bigger issue at stake here, an issue that theist debaters do not want to face… In religious apologetics, their arguments are often interchangeable. For example, a Muslim or a Christian might argue variations of Pascal’s Wager or the Argument from First Cause. This is common, and inexperienced debaters bring them up without even knowing they are common arguments. (Not that there’s anything wrong with that. It implies they came to those arguments by themselves. One should not fault anyone for that any more than one would fault somebody for not knowing how to pronounce a word they learned by reading.)

But their arguments are generic arguments for a “creator”, often filled with flawed logic. That logic aside, none of their arguments ever lead to a logical conclusion that their specific god exists. Debating theists is thus always an extended visit to Non Sequitur Land, a place where theists of different religions all make the same nonsensical arguments and all of them come to different conclusions. (This is an expected side-effect of starting with your conclusion and then fabricating pseudo-logic that you think leads to it.) Of course the lazy way to avoid this problem is not make an argument at all, and instead shift the burden of proof onto your opponent, which in this case makes no claim at all. (Sigh.) And you wonder why so many of us just end up calling them idiots?

Edit… I was looking for a post I saw on Facebook this morning, where a theist posted to a debate group that atheism is a “proposition that no god exists” in his attempt to shift the burden of proof. Can’t find it, but I do see that I have shared on this subject before…

Another edit… Not the original one I was thinking of, but check out this bullshit. It’s from that guy again, and this time he posts his oddball false dichotomy and successfully suckers people into answering with the second option. (It’s a trick. Answer with option 2 and he will use it to mean something else.) Obviously the correct answer is “I identify as an atheist and thus I lack the belief there is a god.” I’m still on my ban so I had to save this to a collection to reply if I get the chance.

Other than the obvious errors in his logic with trying to turn a rejection of claims into a claim itself, asking a question that can have many answers and limiting those you accept to a simple binary is not terribly smart. But then John is not a smart man. See? This is why you shouldn’t debate. 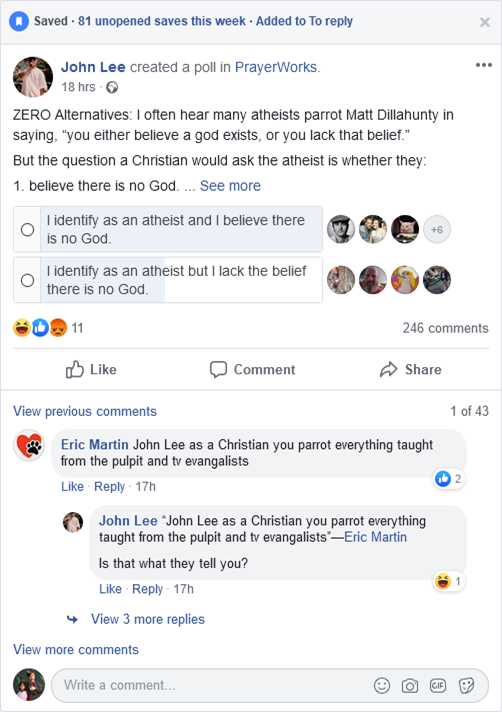 By the way, even if you do believe there is no god, that means something different to what he thinks it does. In his mind it means you reject his god because his one is the one true god.

I’m kind of surprised nobody has commented to this post with “But Christianity is the only true religion because Jesus [insert did something specific to the claims of Christianity here]”, which essentially comes down to “my magical thinking is correct because the magic I believe in is real”. But hey… it’s still early.

OK, last edit… I promise. Here, from the same group by another Johnny, is another fine example of pseudo-logic that jumps through some hoops to arrive at the predetermined conclusion that doesn’t follow.

This isn’t relevant to the burden of proof, but is relevant to my last point about arguments that “lead” to a creator being more than a little flawed and all of them being non sequiturs.